From the center, the path at the church turns right, past the Maljen Hotel. It then leads along the EPS resort and then through the forest behind which leaves the path and meadows between cottages. All the time, it goes up slightly or goes straight, so it's very light. When the cottages go through, there are scattered, large pines. On one of them is a signpost: left for Firing and half-right for Golubac. From there, it breaks out into a clearing from which Golubac is constantly visible. With a gentle ascent it quickly reaches this, 1056 m. n. v. high top on which used to be a tower - a wooden observation deck, and today there is only a large concrete foot in this place. From Golubac, the view extends from all sides. To the west you can see the Valjevo mountains: Povlen, Magleš, Jablanik and Medvednik, and to the north in the distance Cer. To the west, below the Golubac is a wooded, deep valley of the Bukovska River. On the contrary, on the east and south side there is a view of the highest Maljen spot, Kraljev Sto, Velika Pleć, Crni vrh and Paljba and the entire Divibar Plateau, with meadows and woodlands from which the roofs of resorts and hotels originate.. Therefore, this trail is recommended as the first to be walked, as this will give you an excellent insight into the geographical position of Divcibare and other hiking trails.

This direction behind the church turns left and follows an already well-groomed path framed by trees. To the left is the Zujan creek. After a few hundred meters, it turns slightly to the right (west), then crosses the stream. Zujan was spilled around in the vast peatlands. Further the trail leads slightly uphill, first through the pine grove, and then through the meadow, next to the cottages, until reaching the asphalt road Divčibare - Kaona. It should go to the right, about 50m, and then the trail leads through the rare pines on the left side of the road. A little later, it is necessary to cross to the right and after that, through that young pine forest, you reach the peak of Paljba, 1051 m. n. v.
On one side, one can see the Malyan peaks: Golubac, Stražara, Kraljev sto and Crni vrh, and between them the entire Divcibare plateau. On the other side are the Valjevo mountains: Povlen, Magleš, Jablanik and Medvednik. Just below the top, across the street is a beautiful vista with parking. From it, deep in the valley, you can see the villages of Skakavci and Rosici, Razana and Kosjeric. On clear days, several lines of mountain ranges of southern and western Serbia can be seen in the distance. It is nice to be on this lookout when the purple sun sets behind Povlen and Medvednik. It is even more beautiful in the morning, when the fog and clouds from the valley make the white sea, from which like the islands Subelj and Kozomor spring up, and the sides of the valley resemble the sea shores..

The starting part of this trail goes along the asphalt road to Mionica and Belgrade. When the Breza Camp passes, the left turns a macadam road marked with a sign Ljuti Krš.. The trail leads that way, through the woods, between cottages. Beyond the last cottage, the trail leaves the road and turns right, then winds through the forest. After crossing the stream, it goes through the forest with clearings to a tree with signposts: to the right of the guard and to the left. It continues to the left, through the forest. This is where begins the nature reserve of second category: Crna Reka. The trail then emerges on a rocky ridge, which ascends to the lookout at the summit, altitude of 962 meters.
The view from it is very impressive: to the left, across the deep valley of the stream towards Golubac and to the right, across the beginning of the Crna Reka to Bacevac Vis, Cubrica and Pejar. It is truly a magnificent view down the canyon of the wonderful Crna Reka that meanders between the sides covered with thick evergreen birch forests. In the foreground is a lower ridge from which one can get down to the Crna Reka. On the horizon are the Valjevo mountains: Magleš, Jablanik and Medvednik, and somewhat closer to the slopes of Bukova. Due to this view and the untouched nature of the reserve it passes through, this is by many the most beautiful hiking trail on Maljen. Here you get the impression of the beauty of nature at Maljen!

At the beginning, this trail goes on an asphalt road (towards the main ski slope), from which you should turn left at the Pancevo resort (the first large building on the left). Further uphill, also asphalt road passing under the IMT resort (old name). Behind it is an intersection where you should turn right. The road leads slightly uphill between the cottages and exits to the plateau. There is a tree with two red signposts: left Velika Pleća, right Crni Vrh. From there, you go left, a macadam road that climbs slightly and leads through a forest of food, pines and birch trees.. At the pass, at the signpost to the right for Crni Vrh, you should continue further along the undulating ridge.
To the left is the forest, and to the right are several cottages, after which to the right is a wooded hill. Here, the trail branches off from the road to the right and winds up through the pine and birch forest to the summit of Velika Pleća, altitude of 1050 meters. It offers a beautiful view of Ravna Gora and Suvobor, Kablar, Ovčar, Zajčica and Subjel. When the view is clear, Golija, Kopaonik, Zlatibor and Tara can be seen in the distance. Below the Velika Pleća, to the left is the wooded canyon of Crna Kamenica whose murmur can be clearly heard. To the south, there are broad meadows of the Tometino Plateau, across which leads the way to Požega.

The first part of this trail is the same as for the Velika Pleća. For trees with red signposts, continue straight, slightly uphill. When passing the cottages on the right side, the trail enters a forest of pines, firs, crickets and birch covered with dense grass. Between them the path winds uphill. The climb is not difficult but it is constant, so you need to rest occasionally. The end of the climb is at the very rocky-grass top that is marked on several large stones. Crni Vrh, with an altitude of 1096 meters, is the second highest peak in Maljen, but due to its proximity, it has imposed the highest peak on the Kraljev Sto, which is farther from the center of Divcibare.
From Crni vrh there are striking views to the east (left), south (right) and west (right), so they can be seen: Suvobor, Kablar, Ovčar, Zajčica and Subjel, and when clear in the distance you can see Golija, Kopaonik , Zlatibor, Tara and Zvezda. In the far west you can see all the other Valjevo mountains: Povlen, Magleš, Jablanik and Medvednik and below them the Drenovac Kik, Bukovi and other hills.. Looking north towards Divčibare is obscured by the forest through which the trail leads. From Crni Vrh there are paths to the left for Velika pleća and to the right for the „Vidik Tavern“ and further for the lookout point.. 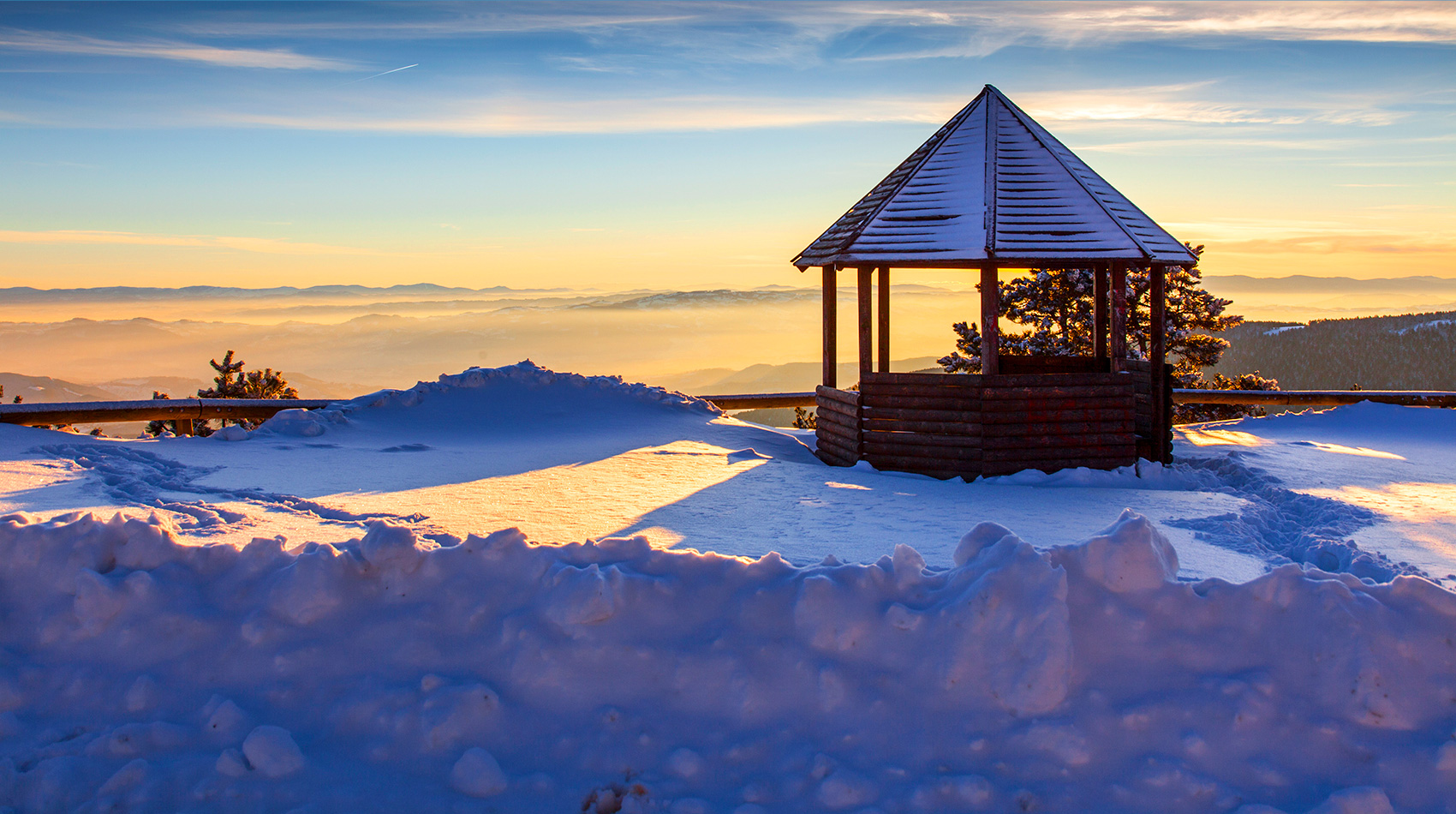 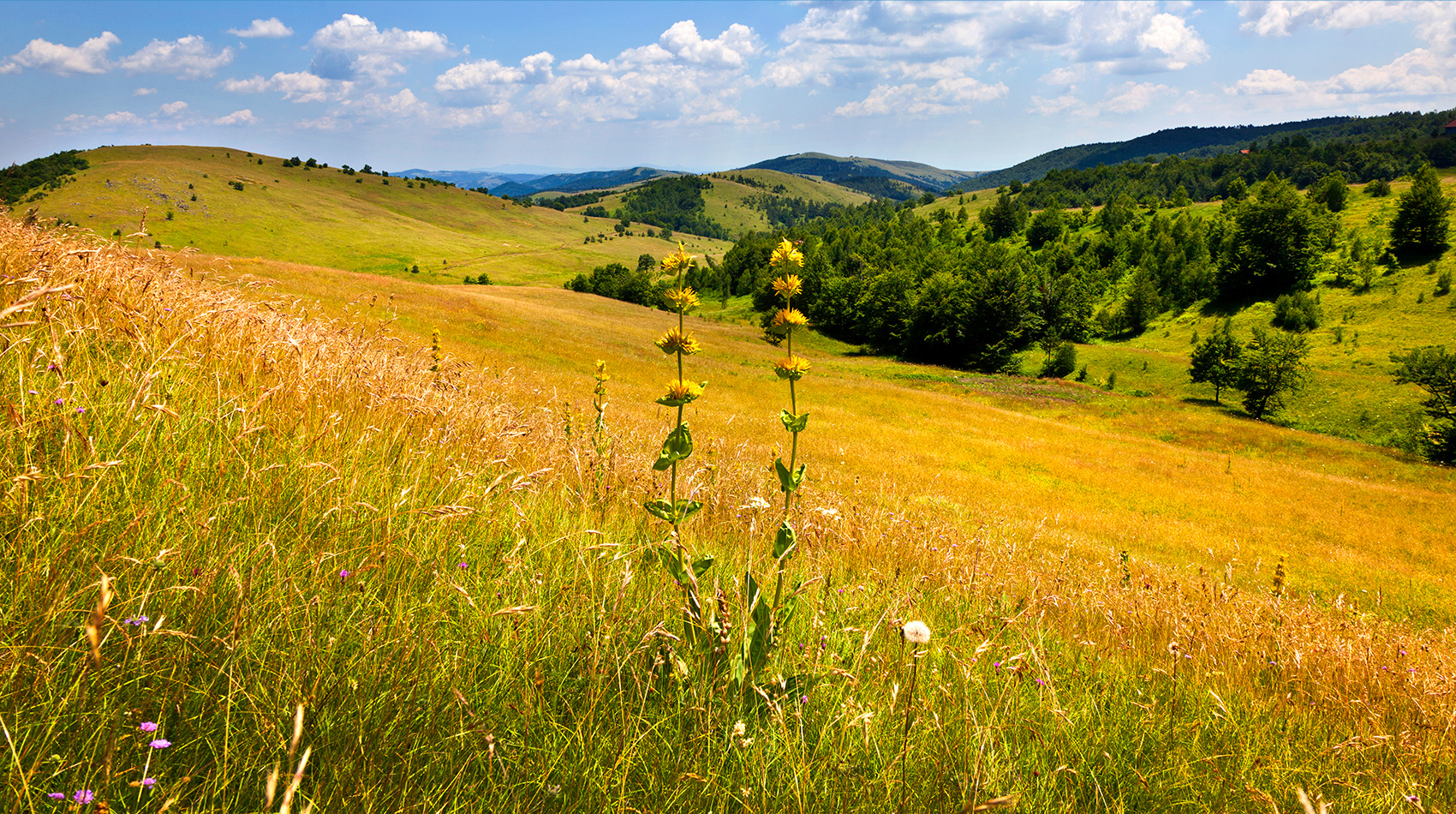